From Buenos Aires to Santiago 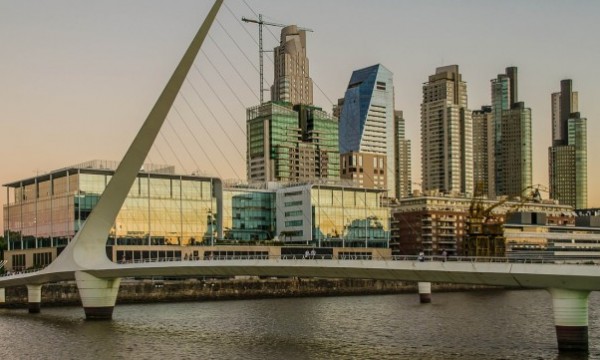 Two South American capital and a wine capital in only 9 days? With this itinerary you will be able to explore Buenos Aires with its mix of European elegance and Latin American passion. You will discover the new powerful Santiago, booming with the benefits of copper high prices. And you will experience the bucolic landscapes of Mendoza, the renowned argentine wine producing region. The road between Mendoza and Santiago is one of the most impressive in the Andes Range so we book a day bus for you to not miss any white peak or deep gorge!

PP-129
Modify the departure date to see other available rates:

DAY 1: Buenos Aires
Arrival to Buenos Aires (NOT on Wednesdays). Regular transfer from Ezeiza International Airport with the Airport Shuttle. Check in at selected accommodation

DAY 2: Buenos Aires
Breakfast. 9 am City Tour: Discover the beauty and wonders of Buenos Aires, see the National Congress, The Metropolitan Cathedral next to the Government House in Plaza de Mayo area. Visit the Colon Theater, one of the most important opera houses in Latin America and San Telmo, traditional neighborhood where Tango performances can be seen in many bars and restaurants. Stop at La Boca colorful neighborhood, which was seat of immigrants - mainly Italians - and now home of some artists.
Enjoy Palermo, an area that combines its architecture and history with entertainment and amusement in its green spaces. Finally, La Recoleta, an exclusive and elegant neighborhood where the famous cemetery is found.
Free afternoon.

DAY 3: Buenos Aires
Breakfast. Free Day. In the evening (8 pm), Tango show with dinner: In the very heart of Buenos Aires, this refurbished historic "conventillo" is a classic building of the porteño culture. A Tango Show is a trip to older times.
Professional artists will show you their best art, singing songs and dancing typical pieces, along with a famous tango orchestra. The show consists of several plays in which you can appreciate 2 tango orchestras, a folkloric group, dancers and singers.

DAY 4: Buenos Aires-Mendoza
Breakfast and check out at 11 am. In the evening, departure to Mendoza by night bus.

DAY 5: Mendoza
Arrival in Mendoza and check in. At 2.30 pm, Half Day Winery Tour: These Tour runs among vineyards in the areas of Lujan de Cuyo and Maipu. You will experience the work culture brought by immigrants, using irrigation techniques (canals and ditches) inherited from the former Huarpes Indians. They managed to change a vast desert into a productive river oasis. This is the scene of the settlement of prestigious wineries, which represent Argentine wines in the world with high quality wines.
You will visit two wineries, one with traditional organic methods and the other that uses the latest available technology. Guided by professionals in winemaking, you will learn about the vinification methods and processes, bottling and labeling of wines, in the end of the tour you will taste the different grapes that the wineries offer. Departure: 2.30 pm. Sundays 08.30 am

DAY 6: Mendoza
Breakfast. 9.30 am: Rafting 12 km (or High Mountain Tour): The Rafting takes place in Potrerillos, a village located 60 km south west from Mendoza city, in heart of the Precordillera, the range before the High Mountains. The landscape is of 5000 meters snowy peaks, desert and colorful rocks.
Rafting is one of the most important adventure sport in Mendoza. It is not necessary to have previous experience, the rafts can hold 6 people plus 1 guide that will provide the necessary security information and the mini course to handle the boat.
The activity is based in the Mendoza River. The base of operations is located on the banks of the river and has locker rooms, showers, two pools and solarium among other things, so it is a great place to spend a beautiful day on the mountain besides doing a Rafting. Rapids are grade III. For rafting bring some clothes and a pair of shoes to get changed after the activity. A rafting wetsuit is provided, but whatever you decide to wear underneath the wetsuit is going to get wet. Bring also a towel, sun protection (hat, sun block), water and food (or money to buy some), swimming suit (remember there are two pools at the base) and warm clothes for after rafting. Back to town at 5 pm

DAY 7: Mendoza-Santiago de Chile
Breakfast. Check out. In the morning, departure to Santiago by bus and time to relax and enjoy one of the most beautiful scenery roads in west Argentina. It is a day bus so don't fall asleep and try to catch a glimpse of the Aconcagua, the highest peak in the American Continent (almost 7.000 meters). Arrival during the evening. Accommodation. 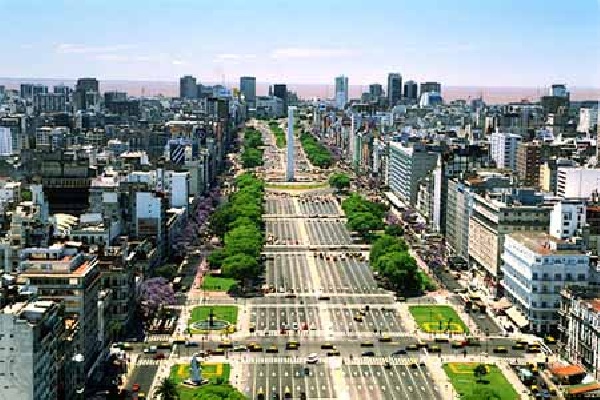 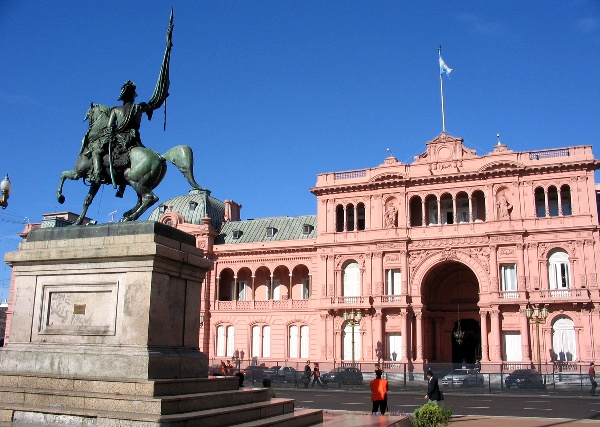 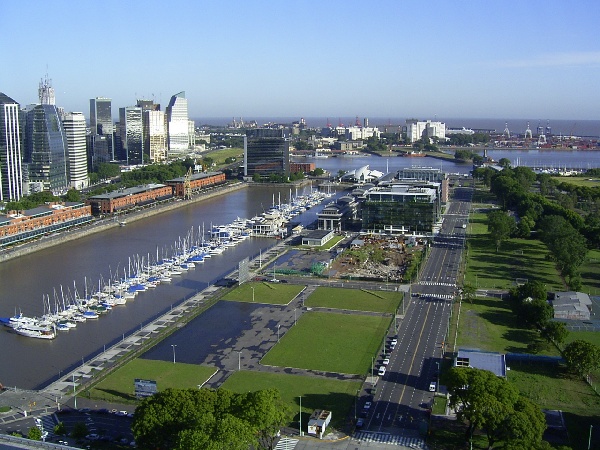 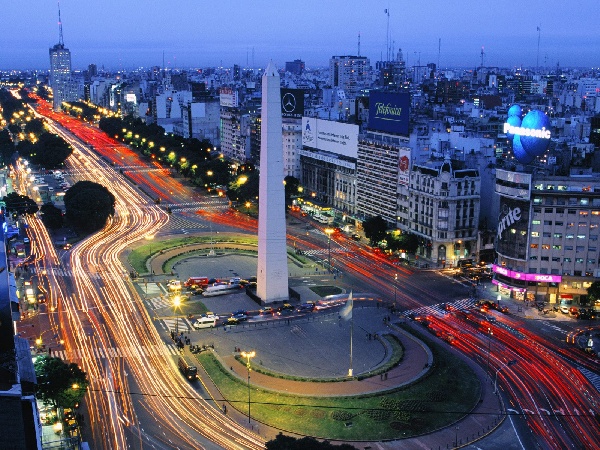 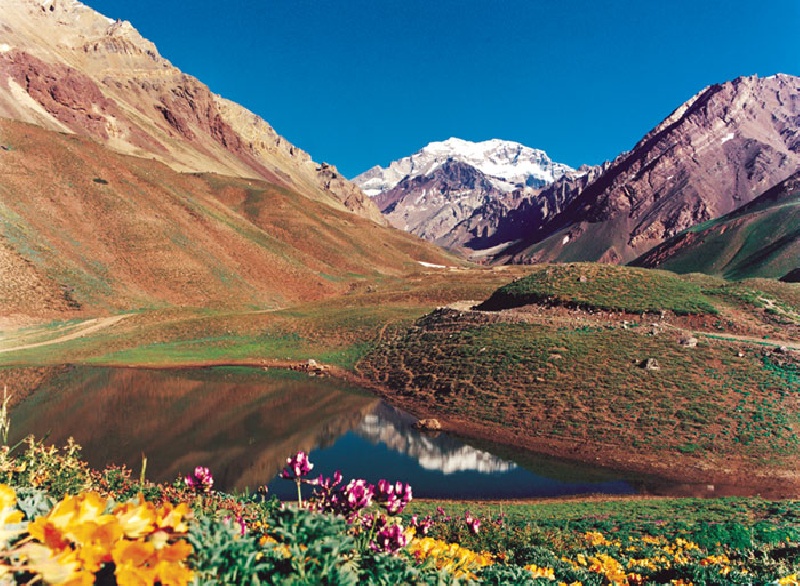 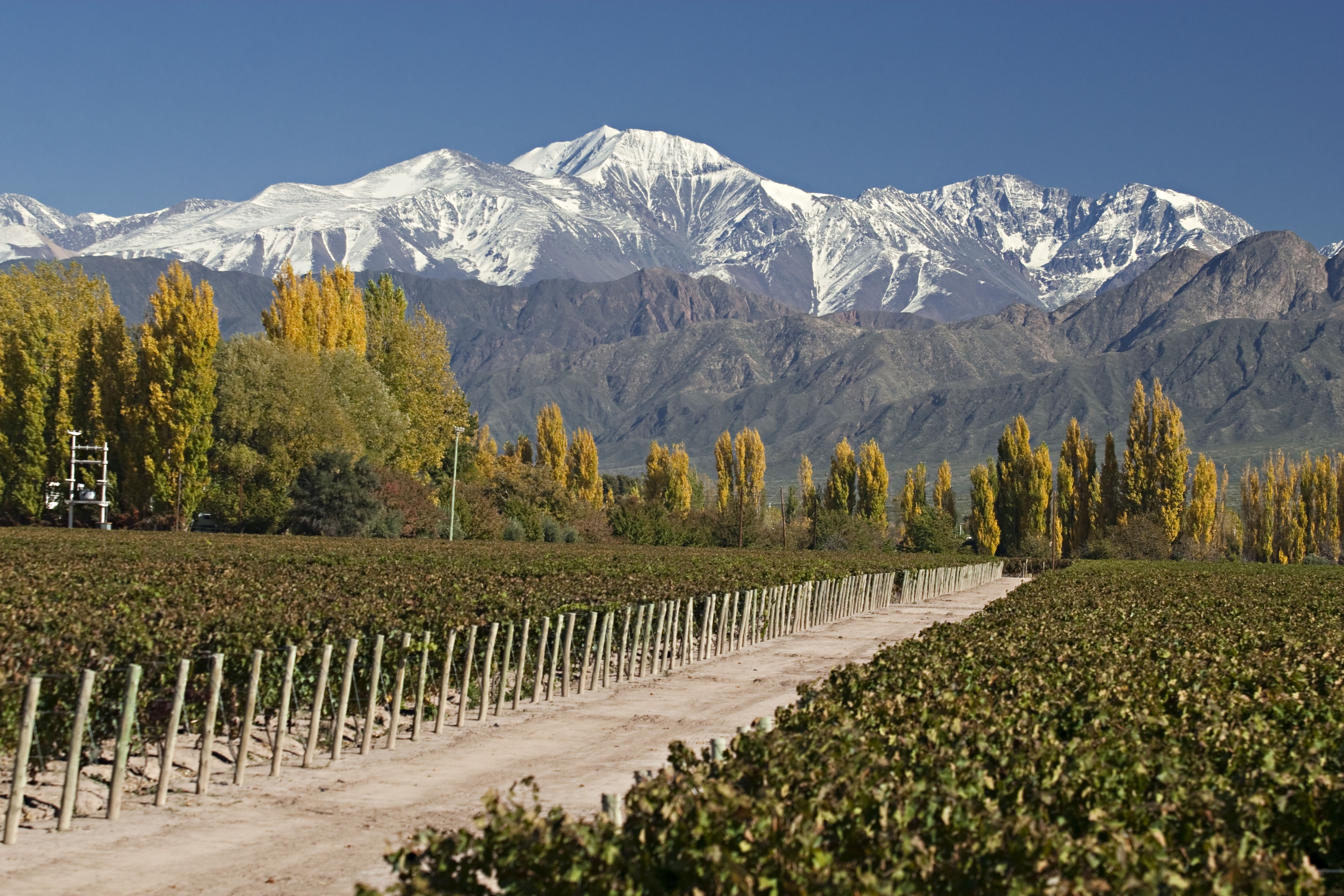 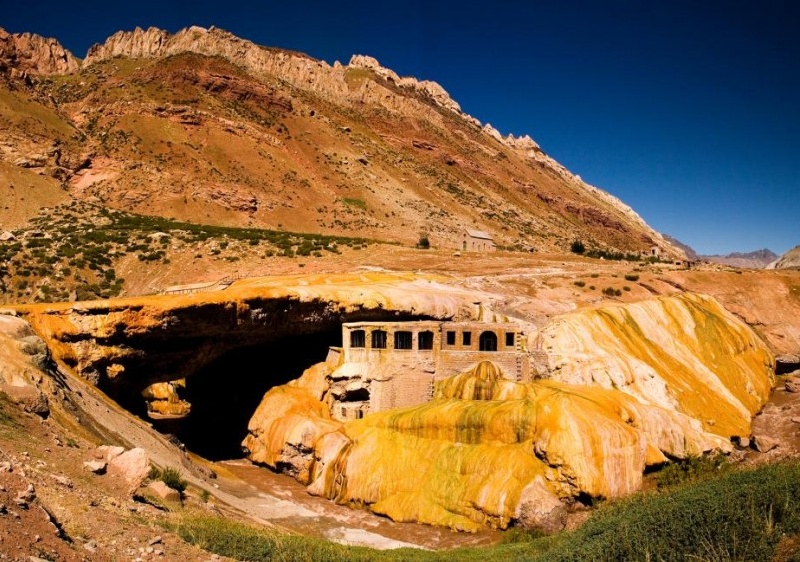 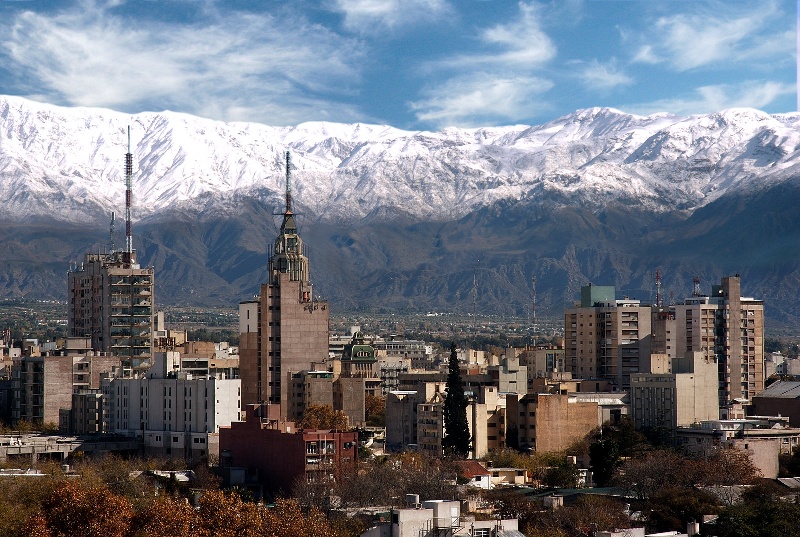 Situated at the foot of The Andes, Mendoza is the capital city of the homonimous province and the most important city of the West of Argentina. It is one of the most chosen tourist destinations because of the various interesting activities available in the region. It is an incredible oasis to grow fruits and vegetables due to the presence of the Mendoza and Tunuyán Rivers.

The climate of the region is mild though the mountains provide a certain degree of aridity. The temperature in Summer ranges from 18º C to 33º C and days are hot and nights are fresh. In Winter, the minimum temperature is 3º C and the maximum registered temperature is 16º C.

One can get to Mendoza City by plane arriving at Francisco Gabrielli-El Plumerillo International Airport, or by car or bus through Nº 8, 7 and 40 National Routes.

In the city, there is a beautiful sight of streets flanked by trees, squares and parks linked by a web of irrigation ditches which is 500 km long and waters the whole area allowing city planning even in arid zones.

Land with historic tradition, Mendoza keeps many memories of San Martín's epic in the cerro de la Gloria (Hill of the Glory), El Plumerillo, San Martín Park and the museums that show documents testifying the presence in the region of this Argentinian eminent person.

Starting point to enjoy adventure travel and high mountain sports like andinism, ski or rafting, Mendoza offers various circuits to go on these excursions. Walks in the five squares, the civic centre and the foundation area make the tourist admire the culture, the history and the idiosyncrasy of native people. In the surroundings of Mendoza City, interesting places and towns can be visited: Ruins of San Francisco Church, Maipú, El Challao, Villavicencio Thermal Resort, Cacheuta, Potrerillos and Vallecitos.

The very well known "Ruta de los Vinos" (Route of the Wines) deserves a special mention because tourists can visit ancient cellars and taste excellent yields which are product of carefully chosen grapes.

When visiting Mendoza, one is going along the land of the good sun and the good wine 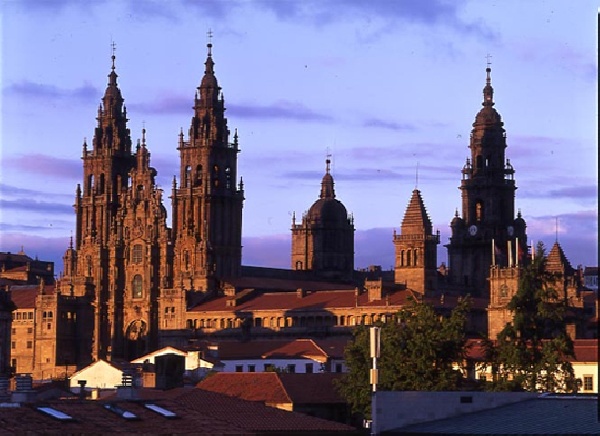 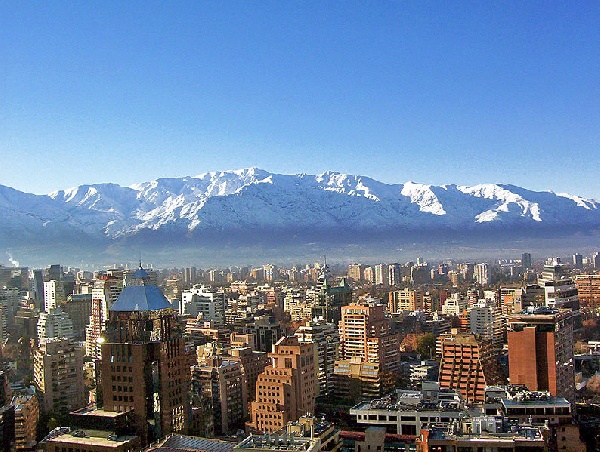 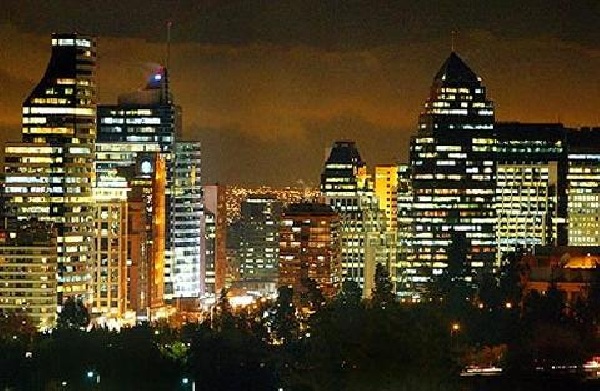 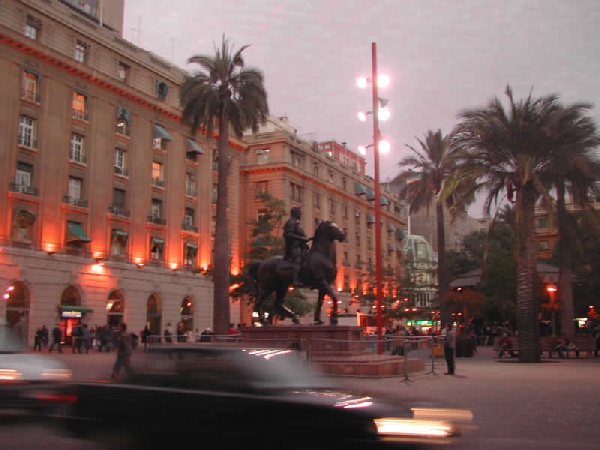